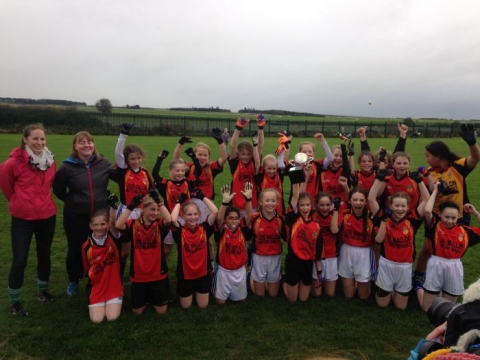 At the start of the match all the girls were full of nerves and excitement. We were so grateful to reach the final. It was a very hard match against the amazing Milltown. They are an excellent team. After the first half, we were winning by one point. The score was 0-4 to 0-3. The teachers said we played well but that we had to step it up. After a thrilling second half and an epic comeback, the referee blew the whistle and called us over. He announced “The winner is …… Scoil Bhríde, Naas!!!!!” Everyone was delighted! The final score was 1-6 to 1-5. The feeling of being the first girls team to win in the history of Scoil Bhríde, Naas is amazing!

By Grace Curtis and Áine Higgins (Rang a Sé)

Posted On
Scoil Bhríde celebrated Maths Week from October 16th to October 20th. Storm Ophelia did not dampen our spirits. Teachers and pupils made a huge effort to prepare maths displays for the corridor. Students took part in many activities such as maths trails and quizzes. Our Senior students visited the Junior classes as park of 'class links' to play maths games. It was a very enjoyable week. Thanks to everyone for making such a big effort, I hope everyone enjoyed the week​​.

Posted On
To view your child's booklist for next year, please click on the class  from the list below: Junior Infants- Fees for books/materials to be paid…

Posted On
We will return to school on Thursday the 31st of August 2017.