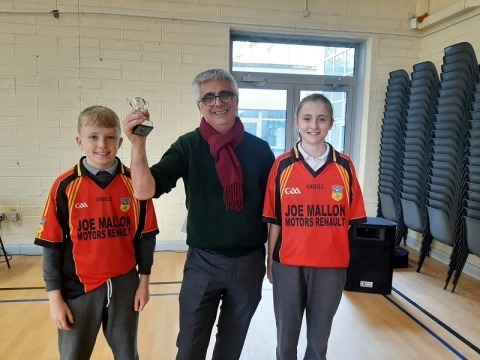 Today was a sad day for us in Scoil Bhríde as we said goodbye to Mr Hartnett. An assembly was held in the hall to remember all the good times we’ve had with Mr Hartnett as our principal and to wish him well in his retirement. Múinteoir Cara’s class performed a song for the assembly and there were prayers, poems and even a song (written and performed by the very talented Múinteoir Liam) which was specially written to mark the occasion! The football teams were there to thank Mr Hartnett for his coaching and dedication to sports in Scoil Bhríde. Finally, the school choir performed the Scoil Bhríde Anthem which was one of Mr Hartnett’s first projects when he came to the school as principal. You can see some pictures from the assembly below. We wish Mr Hartnett well in his retirement and hope to see him back in Scoil Bhríde for a visit in the near future! Slán leat Mr Hartnett! Posted On
Congratulations to all the children from our 2nd Classes who made their First Holy Communion last Saturday. Many thanks to the school choir who performed…

Posted On
World Cup fever has hit Scoil Bhríde! Pictured below are the winners of the World Cup Quiz from Múinteoir Gerard's Sixth Class. A World Cup…